The 900 square feet, 40-seater outlet is decked in green and white and the setting is warm and cosy. The number of affable Cantonese speaking staff at the restaurant adds to the authenticity of the dining experience.

Mak’s Noodle was first established by Mak-Woon Chi before World War II in Guangzhou. According to hearsay, its founder has even served the legendary wanton noodles to Chiang Kai-Sek, Chinese political and military leader and leader of the Republic of China between 1928 and 1975. Mak-Woon Chi’s business was later succeeded by his son, Mak-an who eventually handed over the business to his son-in law, Tony Yung.

Under Tony Yung, the business grew by leaps and bounds and expanded to a chain of six eateries all over Hong Kong including Central, The Peak, Tsim Sha Tsui, Causeway Bay, Jordan and Tin Hau. Over the past 100 years, the recipe remains unchanged and the noodles retain its springy texture.

I have not tried any of the outlets in Hong Kong, therefore I was thrilled to try the new outlet at Centrepoint. At about 10.30am on a Sunday, there was already a queue. However, the queue cleared quite quickly and we managed to get into the eatery at 11am.

I ordered the signature wanton noodle soup ($6.90) while my hubby had the tossed noodle with dumpling and oyster sauce ($9). The wanton noodle soup was a little salty but the noodles were springy and al dente. The noodles and wanton skin are imported from Hong Kong to ensure consistency in taste and quality.

I also like the wanton as it was bouncy and each pleated dumpling oozed the sweet succulence of fresh prawns.  The portion was a little small though and I finished the noodles in three mouthfuls.

The tossed noodle, however was a disappointment. The oyster sauce was overwhelming and made the noodles very salty. The dumplings were nice and juicy and were the only redeeming qualities of this dish. 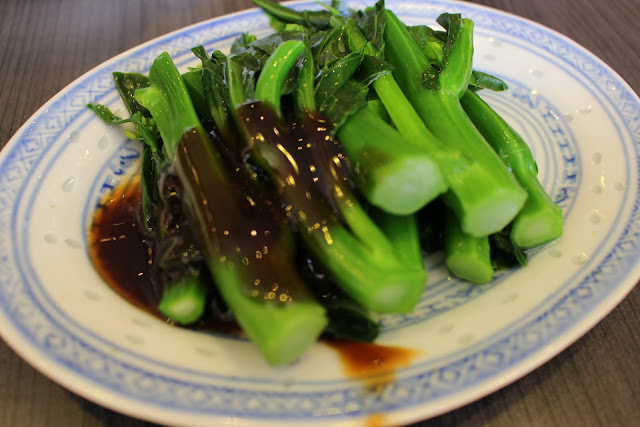 Another lacklustre item on the menu was the seasonal vegetables with oyster sauce ($4.90).

The kai lan was fresh and crunchy, however, it was overpowered by the extremely salty oyster sauce.

Full house on a Sunday

Overall, Mak's Noodle is the place to go if you are looking for a no frills Hong Kong eatery. The wanton noodle soup is decent and would definitely appeal to diners who like the Hong Kong style wanton noodles. The soup may be a little too salty for local palates though.